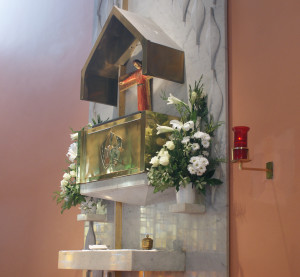 Firstly Congratulations on your forthcoming marriage. We wish you all the blessings of God in your preparation for the bid day and in your living out of the vows you take at that time.

In the Catholic Church, marriage is not just a natural institution – it was elevated by Jesus Himself in His participation in the wedding at Cana to be one of the seven Sacraments. A marriage between two Christians has a supernatural element as well as a natural one. While few Christians outside of the Catholic and Orthodox Churches regard marriage as a Sacrament, the Catholic Church believes that marriage between any two baptised Christians, as long as it is entered into with the intention to contract a true marriage, is a sacrament.

The Catholic Church distinguishes between a legal marriage and the Sacrament of Holy Matrimony. Marriage is regulated by the civil government that has certain rules that must be followed to make a marriage legal. On top of that, the Church views marriages not just as a legal contract, but as a sacred covenant. A covenant is a relationship that is permanent, and is only dissolved at death. Marriage is the sacrament that most closely imitates the love of Christ the bridegroom for His bride, the Catholic Church. For a man and a woman to come to this understanding and to learn to live this in their daily lives as a married couple is our goal for your marriage preparation process. And this process does take time.

Church of the Holy Spirit,
Ballyroan.

The parish office is located in the Ruah Pastoral Centre beside the church and is open from 10.00am to 12.pm daily.

Any cookies that may not be particularly necessary for the website to function and is used specifically to collect user personal data via analytics, ads, other embedded contents are termed as non-necessary cookies. It is mandatory to procure user consent prior to running these cookies on your website.

Analytical cookies are used to understand how visitors interact with the website. These cookies help provide information on metrics the number of visitors, bounce rate, traffic source, etc.

Performance cookies are used to understand and analyze the key performance indexes of the website which helps in delivering a better user experience for the visitors.